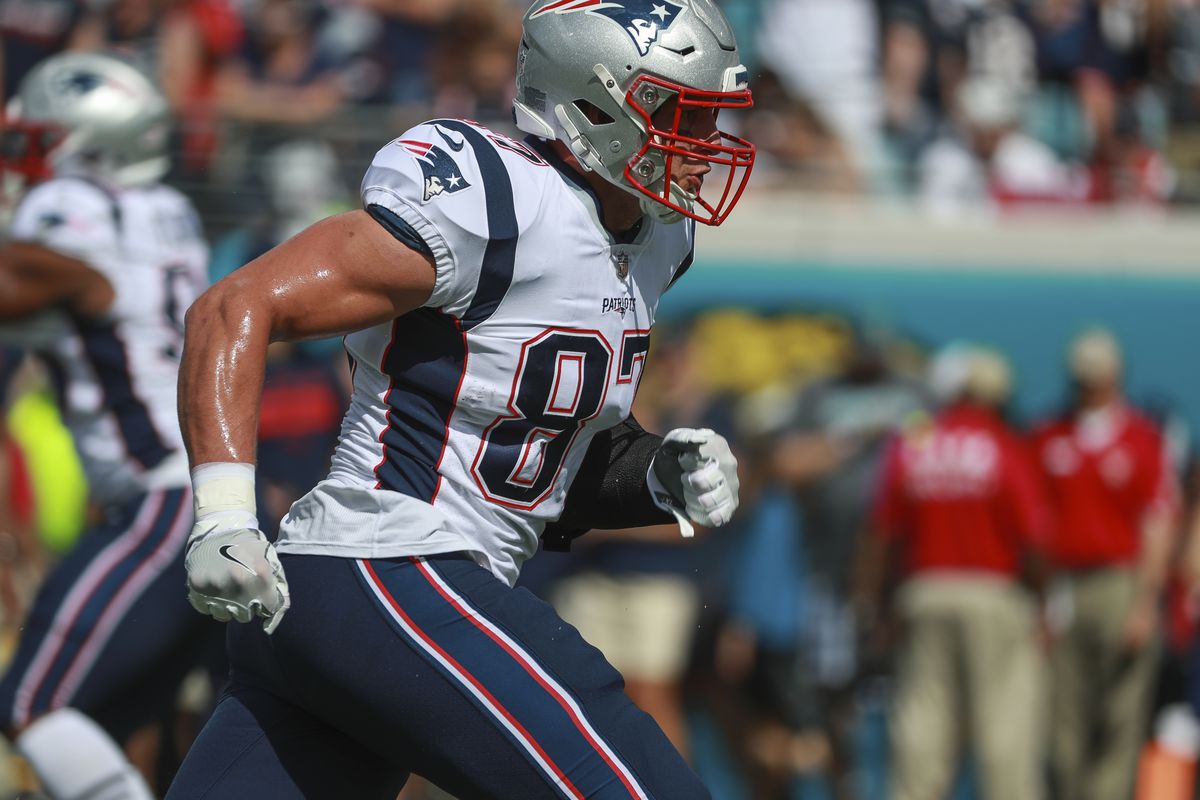 The Patriots head to Chicago in Week #7 to face one of the toughest defenses on their 2018 schedule. Khalil Mack and the Bears defense are tied for fifth in sacks with 18, tied for second in interceptions with 10 and rank fourth best in points allowed per game (19.2).

The Bears defense lines up across from a Patriots offense that has been their old, dominant self of late, scoring 38,38 and 43 points in their last three contests after struggling against the Detroit Lions and Jacksonville Jaguars earlier in the season. For Fantasy owners, Sony Michel and James White have earned their place as must-start Fantasy plays while Gronk is matchup proof. However, the Bears defense is a matchup that puts Tom Brady and Julian Edelman’s status as starters in question.

In an NFL season that has quarterbacks throwing touchdowns at an all-time record pace, even someone with Tom Brady’s legacy has competition for a spot in Fantasy lineups in 2018. Yahoo projects Tom Brady to be the number 12 scoring quarterback this week with 21.96 Fantasy points and he has a much tougher matchup than lesser QB’s like Mitch Trubisky and Joe Flacco.

Brady has thrown for fewer than 300 yards in four of his six starts this season and two touchdowns or less in three of those six. Combine that with a Bears defense that has allowed an average of 16.5 Fantasy points per game to quarterbacks and there is an argument that owners should be starting Mitch Trubisky ahead of Tom Brady this week.

In Brady’s defense, he has back-to-back 300+ yard passing games and has thrown three touchdowns in two of his last three.

Brady is to be avoided in Daily Fantasy sports and with as many as seven second-tier quarterbacks with better matchups, he is a borderline starter in yearly leagues as well. Your alternative more so than Tom Brady is the deciding factor this week.

If Gronks breathing he’s starting in yearly leagues, but in Daily Fantasy Sports (DFS) it’s about  living on a budget and finding value and spending on Tight Ends isn’t typically the best allocation of your DFS funds, but this week it’s worth it.

The Bears rank 11th worst in Fantasy Points Allowed to Tight Ends (13.3) and they are tied for the most touchdowns allowed to Tight Ends in only five games (4). Gronk hasn’t spiked it in the end zone since week #1 against Houston, this week he scores twice with 100+ yards receiving.

The place where the Bears struggle is Fantasy points allowed to wide receivers, ranking fifth worst with 44.2 points per game. Edelman has 11 receptions on 16 targets and a touchdown in two games since returning from suspension. The Bears have been stingy allowing touchdowns to wide receivers (6), but they have been giving up receiving yards and receptions, two things that make Edelman a strong play this week. The Bears rank in the bottom three in yards allowed and receptions per game as well.

Michel is a RB2 in yearly leagues because of the Patriots commitment to running the ball. He has 25,18 and 24 carries for 112, 98 and 106 rushing yards and four total touchdowns in the last three games. That’s why he is a must-start in yearly. The Bears defense hasn’t allowed a touchdown and ranks second best in points allowed to to running backs (14.2). That’s why he isn’t worth the money in DFS.

White has scored double-digit Fantasy points in every game this season. He has four receiving touchdowns and one rushing. He has had five receptions or more in four of their six games and 50 yards from scrimmage or more in every game. He has been the Patriots most reliable Fantasy performer and is a must-start Flex starter in a tough matchup in week #7.

For the same reasons as Michel, White is to be avoided in DFS. The Bears are stingy against running backs between the 20’s, both rushing and receiving, and they have allowed only one touchdown to running backs all season in the red zone.

The Bears don’t have a lot of high-end Fantasy producers, but the Patriots defense allows enough yards to turn possible “Sits” into potential “Starts,” mostly at the Flex position. That being said, they haven’t been as bad as the playing public might think either. They are a polarizing, often misunderstood organization and that’s the case in Fantasy football as well.

The Patriots defense is 10th worst in points allowed to quarterbacks (19.5), 12th worst against wide receivers (39.2), and they are tied for the most touchdowns allowed to tight ends with four. However, they are 13th best in points allowed (23.9) and they have only allowed three touchdowns, one rushing and two receiving, to running backs. They have only allowed two 100+ yard receiving games to wide receivers, two to tight ends, only four running backs have rushed for 50+ yards or more and only Kerryon Johnson of the Detroit Lions has rushed for 100 yards in a game. Offenses are running up a fair amount of yards from scrimmage, but the Patriots defense has done a good job isolating individual players – with the exception of Kareem Hunt and Tyreek Hill in their explosive Week #6 shootout – and minimizing their impact. That means Bears offensive players have a good chance to be effective, but it’s unlikely they have the kind of monster game that swings a loss to a win for Fantasy owners.

Trubisky has back-to-back 300 yard passing games and in those two games he threw nine touchdowns. After the Chiefs shootout on Sunday Night Football, the Patriots have now allowed 15 passing touchdowns and 268.7 passing yards per game. All of this suggests that Trubisky could be a better start than Tom Brady, but with a six game sample size, one game can skew or distort the reality.

The Patriot matchup elevates Trubisky in weekly quarterback rankings,, but they aren’t a defense quarterbacks are feasting on like the Chiefs, Tampa Bay Buccaneers, New Orlean Saints or Atlanta Falcons. If Trubisky is one of two mediocre options then starting him is a viable option, but in shallower yearly leagues and DFS, it’s safer to spend your budget elsewhere.

Normally Howard would be a must-start because of the volume of his rushing attempts, but that hasn’t been the case in 2018. He has only rushed the ball 20+ times once, he has zero 100+ yard rushing games, he has only scored one touchdown and his season high of 82 yards rushing was in Week One against the Green Bay Packers.

Howard is completely absent from the Bears passing game and the Patriots have shut down running backs in the red zone, allowing only one rushing touchdown all season. Running Back is a thin position in Fantasy football, making Howard an unenthusiastic starter for most teams in most matchups, but Howard looks like a 55 yards from scrimmage, zero touchdown player this week and that makes him a serious “sit” consideration.

Cohen is the one-trick pony partner to fellow one-tricker, Jordan Howard. Howard does almost all of the running while Cohen does almost all of the receiving. The Patriots slow linebacking core and focus on preventing the big play allows a lot of chunk yards for running backs like Cohen who catches the ball well out of the backfield and can turn easy chunk yards into productive Fantasy days.

Cohen has 90 and 121 receiving yards, seven catches and a touchdown in back-to-back games. He has 174 and 121 total yards in scrimmage in those games as well. This a game where Cohen should finish with 100 total yards from scrimmage without a touchdown and that makes him a solid Flex starter, but short of deserving a RB2 ranking. Start him in yearly leagues and avoid him in DFS due to his lack of upside.

Robinson has had an uninspiring 2018 season. He has had more than five receptions in only one game and he has zero 100+ yard receiving games. Robinson hasn’t led the Bears in targets in the last two games and he totaled only 87 yards combined in those games.  He isn’t being targeted and he isn’t making big plays. This is a week that he could have 5-8 receptions with under 100 total yards and with how good the Patriots are in the red zone, zero touchdowns. He does have a touchdown in two straight games, but the matchup isn’t strong enough to guarantee him a start in yearly leagues and he lacks the upside to be a sleeper value in DFS.

Gabriel has back-to-back 100 yard receiving games and against Tampa Bay he had two touchdowns. He has even had a rushing attempt in both games. He has more receptions, more receiving yards, only four fewer total targets, the same number of touchdowns as Allen Robinson (2) and he is better running after the catch. If someone is going to have a big game Sunday, and it’s likely that someone will, Gabriel is the best bet and he is available in 44% of Yahoo! leagues .

Burton entered the 2018 draft season as one of the hottest breakout candidates in football. He has rewarded owners with two games of 55 receiving yards or more, zero 100+ yard games and he hasn’t had more than four receptions in a game. What has buoyed his Fantasy value has been three touchdowns in five games and touchdowns alone can make a Top Ten Tight End.

The Patriots are tied for the most touchdowns allowed to Tight Ends with four and they rank ninth worst in Fantasy points allowed (14.2). If the position wasn’t so weak then Burton’s mediocre overall season would be less than inspiring, but in one of the better matchups compared to a weak list of options, Burton is a start at tight end and a DFS consideration against the Patriots this week.

Check out the latest episode of our podcast here