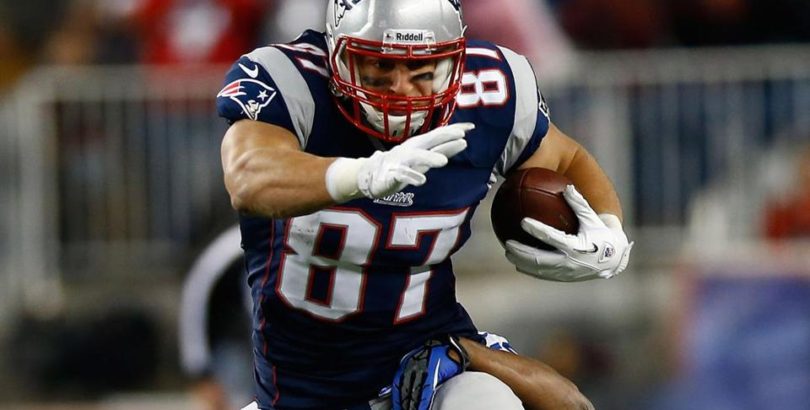 Let Me first say, this is Not Breaking News. At least not to me you or anyone not named Ian Rapoport ( I had to actually add Rapoport to my dictionary ). No you all knew this back in June when Adam Kurkjian , formerly of the Boston Herald ( didn’t have to add it ) tweeted this

From multiple sources, here’s what I have re: the Gronk rumors. Told Belichick wanted to trade him. Offers on the table w both the Titans and 49ers. He and Robert Kraft had a closed-door meeting to discuss. Tom Brady threatened to retire if the deal went through. Kraft nixed it.

This was true, every word Adam wrote.  VP of media relations, Stacey James, denied it was true. Kurkjian was raked over the coals by local media and on Twitter after the tweet. Some stood by him and some did not.   I won’t get deep into this but I will say that I was one who did stand by Adam and did some digging of my own. My source said:

“Not only was Gronk shopped, but a trade was agreed upon by the Patriots and the Rams. Two other teams were not serious contenders for the services of Gronkowski.

The trade that was in play for the All Pro Tight End was none other than all world DT Aaron Donald. Other names were tossed around on both sides of this deal along with draft picks going to LA or back to New England, but the deal was done. And then undone.Tom Brady through Kraft nixed this deal just the way Adam Kurkjian wrote back in June. I am here to simply tie up some loose ends.

Am I saying a meeting between Gronkowski, Belichick and his agent, Drew Rosenhaus, didn’t happen? No – it very well might have, but this deal was killed by Tom Brady and Robert Kraft, not by Rob’s threat to retire – but by TB12’s .When Brady got wind of this deal he immediately called Kraft and. in no uncertain terms said if this happens he would retire.

There you have it – well you already had it. Kurkjian told you way back when. Ony now you know the who and where to go with your: WTF?  Why you ask did I not go public with my knowledge in June? Easy answer. My conversation with my source would have put them in a difficult position, and quite frankly, I did not want to look like I was piggybacking off Adam’s hard work. Now that it is being reported by others, even wrongly, my source is not in jeopardy.

Questions do remain: One, who is leaking this info to “rap sheet” almost five months after the fact?  Two, what is the end game to it? There is always an end game to unsolicited info being given. The third question is why didn’t you all believe Adam Kurkjian in the first place?