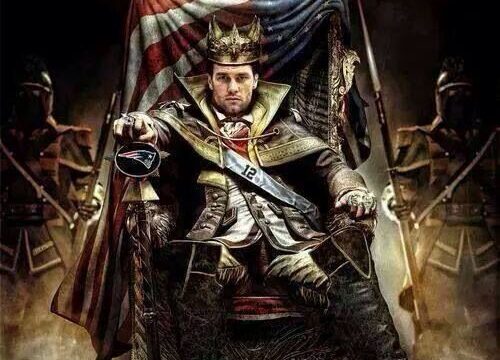 Once more unto the breach, Patriots Nation, once more;

Or close the wall up with our New England dead.

In Pressrooms there’s nothing so becomes a man

As modest stillness and humility:

But when the blast of the refs whistle blows in our ears,

Then imitate the action of the GOAT;

We sit on the brink of the 2019 NFL season, the 100th of the NFL existence and reflect on how lucky we have all been to witness during our lifetime the career of Tom Brady… The once young prince has become the old king. beloved by his people despised by those he has defeated in battle time and again. For twenty years he has lead your army to wage war on those that would depose him. and for 20 years he has vanquished all but the microphoned village idiots. Here are my Monster Keys to Patriots Victory.

Utilizing the Hydra that is the Patriots RB corp is where this game and season should focus on, Others ( I won’t call them fools that’s up to you)  will want the Patriots to rear back and sling it from the get-go using Gordon-Thomas and Edelman in the way Pats teams have used wideouts in the past to move the chains …. BULL SHIT i think sunday night should revolve around the backs… I want to see two back sets early and often. With the often forgotten James Develin leading the way Michel and White combined to amass 2,157 all-purpose yards and 18 touchdowns during the 2018 regular season. I say the Patriots ride that wave early.

Mike Tomlin has been a creature of habit during his head coaching career, until last December that is. Instead of his usual soft zone coverage that Brady rips apart, the Steelers came out in man, and it worked. The Patriots put up just 10 points, The issue with man is there will be Green open spaces. Tom needs to motion his receivers into trips and stacks on one side of the field, forcing the Steelers safeties to cheat to that side. then exploit the single coverage on the opposite. Look for a lot of wheel routes out of the backfield and quick stuff to the flat too.

Last december down at Hinez the Pats racked up 14 penalties. Their Most since 2014 and

they sprung up at the worst times. A key ( AKA controversial) pass-interference penalty set the Steelers first touchdown up before the end of the first half – a holding penalty near the goal line occurred a couple plays before Brady’s red-zone interception, and false start and holding penalties killed their final series. Do not alow STUPID to push you behind the chains.

Field position is going to be a huge double cut key this week. On one side there is rookie punter Jake Bailey , Bailey is going to be called on to force the Steelers to march the length of the field. And when this happens I believe the Pats need to force this team to run the ball

Lock down JuJu Lock up Mcdonald …

JuJu Smith-Schuster and TE Vance Mcdonald are my two biggest worries in this game. Be it Gilmore or a combo of the Mccourty Twins and Gilly on the # 2 JuJu needs to feel the full weight of being a # 1 receiver. I think it will crush him. And now Vance , Who names a kid vance ? Body up Mcdonald do not give him free releases, he killed it in last years game. this is the Steelers only hope of winning this game.

That’s it folks the first set of keys are cut and the turning is all that needs to be done, yes this is very basic stuff compared to many of my key rings but this is week one. it’s a basic-bitch game. Against a basic-bitch coach. So that’s where we are. And there is no more to do but turn these keys and get to 1-0