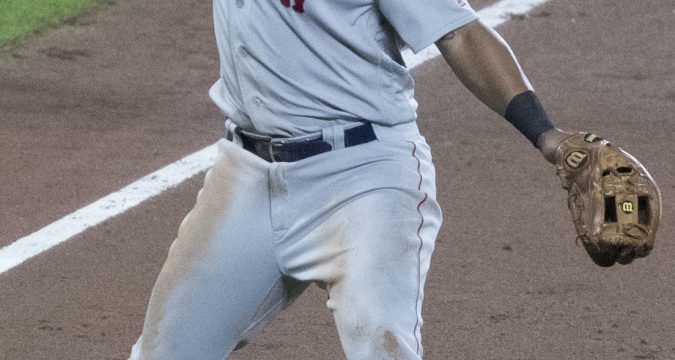 Don’t look now folks, but our young stud third baseman is quietly and somewhat loudly putting together what’s most likely going to be his best overall season with the Red Sox. Now don’t get me wrong I myself have been seeing the possibility of this starting last season. This season however over the past couple of weeks to month, he has been really putting on an offensive show, and also a defensive show at the same time.

Scorching Hot At The Plate

Let’s talk about the offense first.  Mr. Devers is swinging the bat really well right now to say the least. Coming into tonight’s game, where Devers went 1-4 yesterday with another Home Run to bring his season total to 19. I’d be an idiot not to mention that at this point, he’s on pace to hit over 30 home runs, and the way he’s hitting the ball right now, and with 65 total games left in the season, (32 of which are at home) (33 on the road) so that means they only have 1 more game on the road than at home left in the season, but aside from that Devers has a really good chance to hit over 30 home runs, and in my opinion and I think most would agree, he could definitely do that. I say that because the way he’s swinging the bat and “putting the ball in the air” from what Cora said and what we’re all seeing and witnessing.

Now on to Devers defense. Like his recent improvement in his offense, Devers defense has been outstanding this season. That has a lot to do with his off season workouts. Devers has been lights out over at 3rd base this season, and is also putting together a really good defensive season to go along with his outstanding offensive season. Devers is finally becoming the player he was portrayed to be, and what we all saw in him and knew what he could do with just a little time and patience.

Now I’m not a mind reader, but only time will tell if this continues with Devers. All I have to say, is that if it does, we’re in for quite of a showing and “extremely” fun player to watch the rest of the season. Let’s just hope the rest of the team pulls it together and successfully defends their Championship.