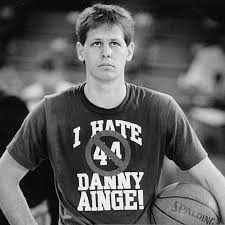 Danny Ainge must be a huge Beastie Boys Fan , because he took the bands sage advice and slept when he got to Brooklyn .There were no trade ups in the first round – no deals involving established stars and each pick that came and went looked to this writer like it was made during R.E.M sleep. Even the Chants of Kyrie’s Leaving from the crowd couldn’t shake Danny from his slumber….

Romeo Langford : when this pick was made I had a hard time hearing the commish read his name over Ainge Snoring. While Romeo is a good athlete who attacks the rim and get tot the stripe he isn’t the deep threat this team needed at guard. Yes i know he was hurt yes i know he should improve with time. What i don’t know is why Ainge gambled that what might happen will, with Nickeil Alexander-Walker there for the taking. C

Grant Williams PF Tennesee : He’s short. He’s not a great athlete. He was taken with Georga product Nicolas Claxton still on the board. Or even better Danny could have stayed put not traded with Philly. OMG, and taken Brandon clark out of Gonzaga. C

Carson Edwards SG Purdue: I’m okay with this one . Edwards is a Popcorn setting microwave player who can shoot OMG Danny drafted a guard who can shoot ? B

Tremont Waters PG LSU: Butchie is taller than Waters , the best thing i can say about him is he;s from New Haven , hope he enjoys Maine C

Thats it another yawnfest ass scratching Draft is in the books for Trader Danny, god i wished there had been a Sox game last night.