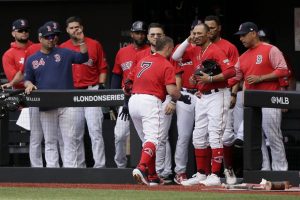 All right, guys, I’ve already said it once, and at this point it definitely bears repeating: the sole problem with the defending champs this year is hands down THE BULLPEN. I repeat:THE BULLPEN. The offense isn’t the problem, as we can still score runs like no one’s business. The problem comes down to holding the lead. I also want to mention that we need a shutdown bullpen guy, and it was mentioned today that when Nathan Eovaldi comes back he is going to be our closer for the remainder of the season. Now I am actually ok with this, with the main reason being is that he was lights out in the playoffs.

Now as for a set-up guy, I would lean between Workman who’s also having a phenomenal season and also Matt Barnes, and then slide Wright into your long position. Now it comes down to the starting rotation, and I say stick to what works, and that’s Sale at the top, then Porcello, Price, E Rod, and at the bottom slot in Johnson.

Now as for the lineup I say keep it the same, but you have to move Chavis up in the order either in the cleanup spot or the 5 hole, as he is tearing the cover off of the ball. I would say make Chavis your everyday second baseman when Moreland comes back, and throwing Chavis over at first as needed, when Moreland needs a day off. But either way no matter what you have to keep him in the lineup as he is putting together a monster rookie season, and has the potential to possibly win the Rookie of the Year award.

Now even if we don’t catch the Yankees in the division, I’d be fine with the wild card, as long as we make the playoffs, because mark my words, yes the Yankees are killing it now, but when it comes to the playoffs they will not go far whatsoever, and that’s not a prediction that is merely a spoiler.

So only time will tell how the rest of the season pans out, but relax folks we’re almost at the all star break we still have a lot of baseball left to play. Don’t start hitting the panic button yet. Have faith, our boys will be there in the thick of things in October.